So you've survived the Zombie Apocalypse ... Now what?

I have had a Zombie thing since my first Romero movie back in the day. It was Night of the Living Dead and it was black & white and strange, but I loved it. Prior to this, I had watched the "Zombies" (i.e. green, slow-moving things that moaned about "Brrrrraiiins!") on Tales of the Cryptkeeper and Are you Afraid of the Dark? but, these zombies - these slow-moving reanimated corpses, they spoke to me on a level that was way more intense. As I grew up, watched more horror movies and got into the genre as an enthusiast, I realized why - these zombies had a message, they were a conduit of meaning, and that spoke to me somewhere inside myself.

I mean, zombies are terrifying - they never stop, not because they're stubborn - Oh no! It's because they can't - like, they just ... can't. I think the freakiness of them is summed up nicely in World War Z,


They displayed no conscious thought, just sheer biological instinct. I once watched a Zed Head go after something, probably a golden mole, in the Namib Desert. The mold had burrowed deep in the side of the dune. As the ghoul tried to go after it, the sand kept pouring down, and filling in the hole. The ghoul didn't stop, didn't react in any way, it just kept going. I watched it for five days, the fuzzy image of this G digging, and digging, and digging, then suddenly one morning just stopping, getting up and shuffling away as if nothing had happened.

Right, I thought so.

Then I began to wonder, what would happen after the apocalypse? (If you're a fan of Romero, you know - the Zombies always win, so there was no "Beat them back!" thing in my mind; I mean, again - slow shambles of unstoppable chomping power) Of course, there is Day of the Dead where they have military ... or paramilitary ... or whatever, operations and they attempt to teach a Zombie how to speak, and there's Land of the Dead and Survival of the Dead where communities thrive (heh heh, sort of?) after the apocalypse, but in general, most literature and movies focused on the direct aftermath of infection, not the long reaching societal changes that the infection could bring. Let's see - there's 28 Days Later and 28 Weeks Later, where the fast hordes of PCP-Zombies can starve to death (er ... death?); and Dead Set the miniseries where reality TV met Zombies (Yes, I have a British movie fetish too); and then, well ... most of these will be the same - outbreak + disbelief + mad running around = zombie movie.

Then, last winter, I came across The Forest of Hands and Teeth by Carrie Ryan. This book was set generations after the Return - a time that is best reviewed after reading Ryan's contributing short story (In Unicorns vs. Zombies) Bougeonvillia.

Carrie Ryan is one of those authors who never pulls back. She begins something and lets the story roll, running along with it and shouting out a narrative that is so real and so poignant that you run alongside her. It's one of those types of stories. The Forest of Hands and Teeth began with a girl, Mary, who is at the cusp of so many things - her father dissappeared and is probably unconsecrated (the term for zombie), her mother is half mad with wanting to be with her husband; her brother is a cold guardsman, her best friend bent on marriage and growing up and then the love of her life and his brother competing for her affections. But this world is also abotu survival - it's only a thin fence of chained links that separates the living from the ... undead.

What I loved about The Forest of Hands and Teeth was the grittiness of it. It was just so tragic and sad, and you couldn't help but be swallowed up by the story and the characters. You are carried along with the action, and you know it will end badly, you know that you are reading along and you know it is going badly for your characters ... but you can't stop. It's an amazing book and I think everyone ought to read it. 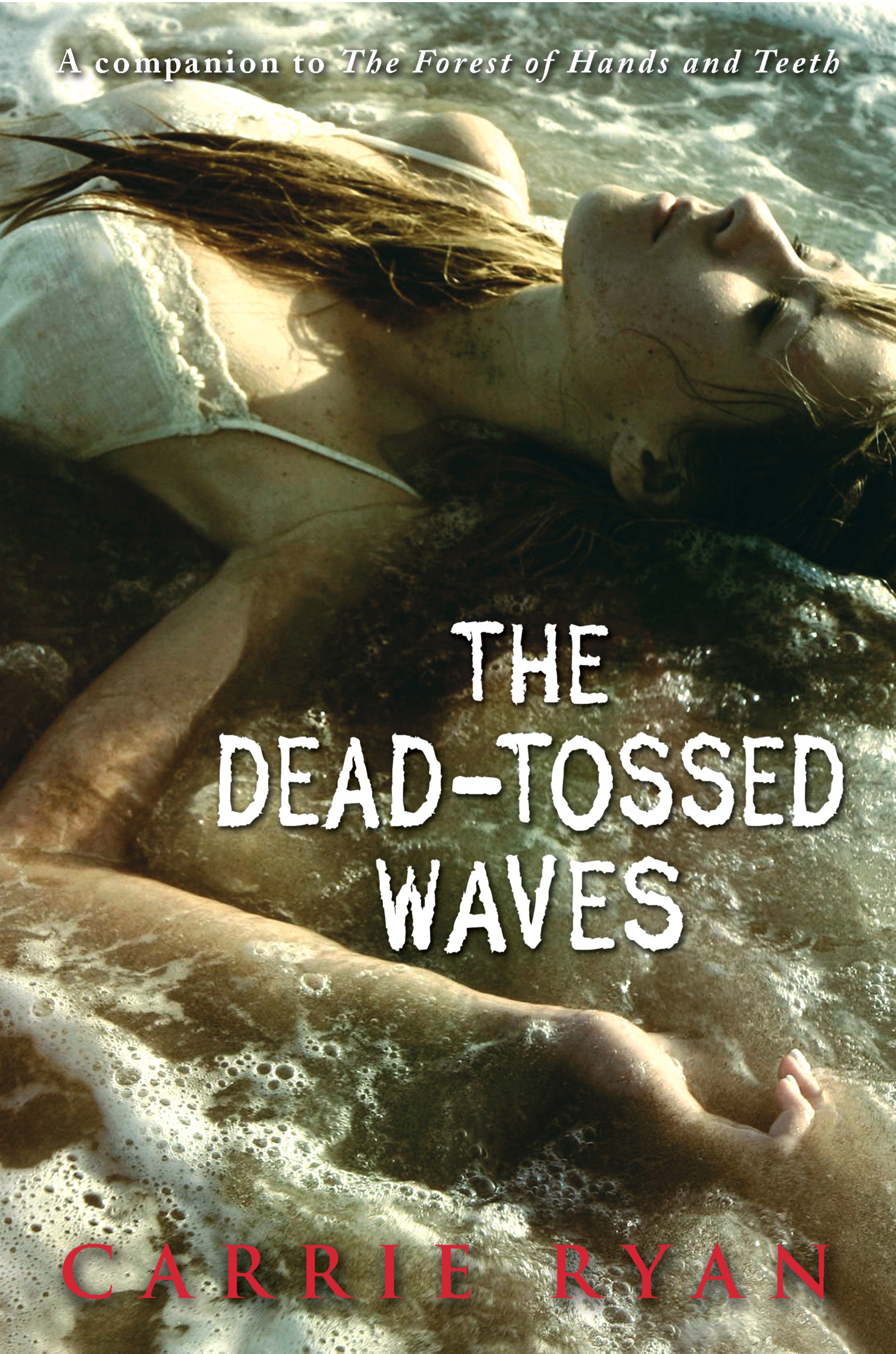 But this is the review for The Dead-Tossed Waves - so let's at it! :D


Gabry lives a quiet life, secure in her town next to the sea and behind the Barrier. She's content to let her friends dream of the Dark City up the coast while she watches from the top of her lighthouse. Home is all she's ever known, and all she needs for happiness.

But life after the Return is never safe, and there are threats even the Barrier can't hold back.

Gabry's mother thought she left her secrets behind in the Forest of Hands and Teeth, but like the dead in their world, secrets don't stay buried. And now, Gabry's world is crumbling.

One night beyond the Barrier...

One boy Gabry's known forever and one veiled in mystery...

One reckless moment, and half of Gabry's generation is dead, the other half imprisoned.

Gabry knows only one thing: if she is to have any hope of a future, she must face the forest of her mother's past. 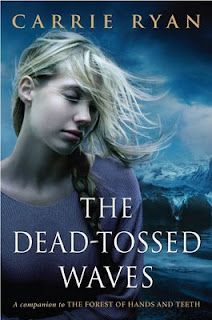 So, TDTW opens up a couple of decades after TFoHaT: Mary is all grown up, living in Vista with her daughter, and that's about it for that (I refuse to spoil!).  Our main character is Gabry, the golden haired daughter of Mary, who has lived her entire conscious life in the barrier-enclosed world of Vista. She explains soon after the book begins that she had lived in the lighthouse with her mother, cleaning up the bodies that wash up on the shore from time to time. Gabry is shy, quiet and somewhat reserved in the sense that she is not quick to act when she feels pressured, but is quick to act when she feels she has to ... that's a long way to say that, she has a tonne of regrets when she acts, but her action drives the story.

Gabry is sometimes frustrating to read: She takes forever to get to any one point. She has a huge crush on Catcher, but there are a few obstacles in the way: one being the fact that he was just bit by a mudo (Another name for the zombies in this world). This brings a new element to the Ryan Zombie Universe: immunity. Catcher is immune (this totally doesn't count as a spoiler since it's int he first five chapters) and what that means for Gabry and her friends is complicated.

What struck me about this installment to this series was the inclusion of everything in the wider world: for Mary's story we were stuck with Mary, and she grew up isolated in this tiny outpost of civilization, where people were forcibly kept ignorant of the rest of the world. With Gabry, she was educated about the world - she was taught about the satellites that can still be seen oribiting the planet, and about the other outposts and where Vista comes from; she's been told about the various religious fanatics and groups that rove the forest recruiting, and she essentially knows how the world works ... theoretically.

Because the thing of it is, that even though she knows these things theoretically, she doesn't understand them - doesn't realize the depth of her world, until she actually has to go out into it and survive for herself. She must question herself and grow up over and again. She meets people who question her, and those she thought she knew challenge her to her most vulnerable. It's amazing.

As frustrating as I sometimes found Gabry's character, I loved her by the end - I felt her loss so profoundly, and new it so well that I didn't want to finish it - which is is why I am glad I only finished it two months before The Dark and Hollow Places comes out!

Now, before I finish it must be said: Team Elias, all the way!
That is all.

Really, though, internet people - this is such an excellent bridge book - it reignites the passion from the first book and carries it forward so that you are excited for the third! I cannot express how good the writing was, it is that moving, and I would recommend it for any Zombie enthusiast - and certainly for any Young adult addict!

Say what you want about the genre, but it is true that Zombies can be metaphors for nearly anything - and for Ryan, they really are - they represent loneliness and regret, instinct and the wild, the human animal and the fear of death. They are manipulated into certain forms until they are strikingly scary and impossible not to think of late at night.

I highly recommend this book and I think you will all love it!