Review of Steig Larsson's "The Girl Who Played with Fire"

I have had this book kicking around for about a year now, and I picked it up a couple of weeks ago - and just slammed through it. Larsson really did know how to compel a reader - only ... he ended it on a cliffhanger. Yes, he did.

Okay, since I have not read the third, and I don't want to ruin the first or second for anyone, this will be more of a review in brief, then a full out review - when I read the last one, though - no promises!

Mikael Blomkvist, crusading journalist and publisher of the magazine "Millennium, " has decided to run a story that will expose an extensive sex trafficking operation between Eastern Europe and Sweden, implicating well-known and highly placed members of Swedish society, business, and government. But he has no idea just how explosive the story will be until, on the eve of publication, the two investigating reporters are murdered. And even more shocking for Blomkvist: the fingerprints found on the murder weapon belong to Lisbeth Salander--the troubled, wise-beyond-her-years genius hacker who came to his aid in "The Girl with the Dragon Tattoo, " and who now becomes the focus and fierce heart of "The Girl Who Played with Fire." As Blomkvist, alone in his belief in Salander's innocence, plunges into an investigation of the slayings, Salander herself is drawn into a murderous hunt in which she is the prey, and which compels her to revisit her dark past in an effort to settle with it once and for all

Okay, so if you recall from my review of "The Girl with the Dragon Tattoo" - Larsson was obsessed with gender relations in Sweden. Gladly, the continued in Book 2. We open up with Salander running around the world, her mind in numbers, but back in Sweden Blomkvist and Millennium are getting ready to bust open a can of worms over the illegal sex trade of Eastern European teenaged girls into Sweden.

What's particularly interesting is the way that Salander is portrayed by the media - a phenomena that is remarked upon by many of characters in the book. The newspaper latch on to the more sensational parts of her life - her relationship with lesbian women, her involvement with a band called "Evil Fingers" and her isolated childhood in and out of psychiatric hospitals where she received "treatment" for something that the newspapers never specify. The character Faste - a misogynist police officer on Salander's case, brings all this to a head within his own words and personality. He fixates on all these stories until it ruins him, harping on and on (very hatefully, mind) about the lesbian sex, the "satanic lesbian rock cult" and more. The characters Modig and Bublanksi are the ones that temper that - seeing things rationally and both losing their tempers with Faste at different points in the novel.

Modig herself is an inetresting character - she's a cop, a wife and a mother, and she is stuck in the middle of this male-dominated profession where she is constantly being hazed by people like Faste, regardless of the fact that she is good at her job and has good skills and insight into the case.

Again, Salander is at the center of this gender dispute - described several times by Blomkvist as "The woman who hate men who hate women" (a nod to the original novel's original Swedish title). And to that end, the novel is gritty in that same way - the disrespect of women is carried out enthusiastically, making your skin crawl and your jaw clench as you get enraged at the men who are hurting women. You want to throttle a few characters yourself, but you keep reading, following Salander as she uncovers the secrets in her own past, the things she was kept from until the killer climax of a cliffhanger ending.

To be honest, this issue is dear to my heart - the gender discrimination women experience - even in such a wonderfully liberating place as Sweden, is a disgusting reality, and yet very rarely acknowledged with any kind of seriousuness. Books like this are often very shocking and distrubing because they bring that terirbleness to the center of the storym forcing us to confront it, again and again, and seek some sort of resolution. And the beauty of the Millennium series is that there never really is an adequate resolution. 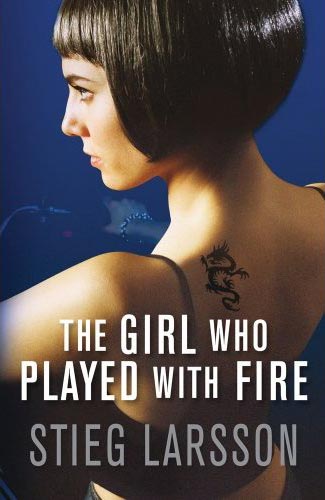 The other theme that runs through this book was downplayed in the original to an extent: the role of the media in modern life - particularly where it concerns the police, and investigations. There are plenty of pot shots taken at the media and scrubbing for information basically on its sensationalist value as opposed to being truthful and/or helpful. On the other hand, Blomkvist represents the good journalist, the one we think of as a good guy - the one that seeks truth above all else, regardless of the price.

On the other hand, it is also critical of police manipulating and/or hiding information from the public, squirreling away information "for the benefit of the nation". Larsson is critical of this, citing again and again the police folders on Salander and her opponents as being the root to the reasons for the problems in the book.

All in all - it was a great book, and I can't believe I do not have the third within my grasp right now, where I can peruse it wildly through the night because of that blasted Cliffhanger! On the plus side, I have the movie - so guess what my study break will be devoted to? That's right!


Until next time!
Cheers!