Chaos and Aftermath: My Review of "Dogblood" by David Moody

“People tell me I’m wasting my time with your type. They tell me you’re no better than snaimals, that you’ve got dog blood running through your veins and you should be rounded up and shot.”
“I don’t care what they –"
“You know what I tell them? I tell them they’re wrong. But you’re the only one who can really decide who’s right. If the boot was on the other foot, and I was your prisoner, Danny, what would you do now?"
Dog Blood, David Moody pp. 181

The Earth has been torn into two parts by an irreversible division. Whether due to nature, or the unknown depths of the mind itself, everyone is now either Human or Hater. Victim or killer. Governments have fallen, command structures have collapsed, and relationships have crumbled. Major cities have become refugee camps where human survivors cower together in fear.

Amidst this indiscriminate carnage, Danny McCoyne is on a mission to find his daughter Ellis, convinced that her shared Hater condition means her allegiance is to people like him. Free of inhibitions, unrestricted by memories of peace, and driven by instinct, children are pure Haters, and may well define the future of the Hater race. But, as McCoyne makes his way into the heart of human territory, an incident on the battlefield sets in place an unexpected chain of events, forcing him to question everything he believes he knows about the new order that has arisen, and the dynamic of the Hate itself.

I was told that this was a zombie book and so, when I could I picked it up and paged through it. It was … curious … not like those old fashioned zombies … not slow and shambly and intellectually unconscious. These zombies are more like the PCP-Zombies like in Cell and 28 Days Later – only, they still think … mostly.

This is the second book in the series (a fact, maybe, I should have figured out) and it picks up after some shift in the population has occurred so that some people, a minority of the population, have become what they call “Haters”. Haters seem normal – no decaying flesh hanging off of them, or holes blown off their bodies – they’re alive too, unless that wasn’t clear. The only tick they have that separates them from regular humans is … well, some sort of kill switch – that is, whenever they see regular humans they have a nearly impossible to ignore need to kill them. Like a zombie … only they usually use tools (children excepted) and don’t then eat their victims.

There has been, up to the end of this book anyway (the third one may have some new information), no real investigation into the cause for this can been conducted, and the regular humans exist in constant and rising fear in refugee camps that are overcrowded, ill-supplied, and very dirty. They are barricaded against the Haters, but as they continue to exist so close to one another, with no supplies or room to breathe, they fight and kill one another, thinning their own ranks as the direness of their predicament fully hits them, over and over again.

This interplay between rooting for the regular humans and becoming increasingly frustrated with their dismal situation (and the violence that they bring about) is one of those Who is the Real Monster? situations where the Reader is given a darker glimpse of who they naturally assume should be the hero. I have a personal love for this kind of fiction – I find it refreshing to see dimensions in my heroes – to see that the term “hero” is as malleable as all other terms. Essentially, that anyone can be a hero and anyone can be a monster – given the right stimulus. These parts of the novel follow the tragedy that is the life of Mark – cousin to Danny from the first book, and general contender for the unluckiest man in the world.

Mark lives in a hotel room with his pregnant girlfriend, her mostly bedridden parents and his cousin’s wife, Liz. Due to dangers, the blinds stay shut, and the lack of supplies mean that in general it is dirty and smelly – the water being cut off as well as the electricity. The whole things screams terrible, and to try and make it better, Mark is a civilian volunteer who goes with the military on raiding expeditions to nearby towns to gather what supplies and regular humans as they can. It’s dangerous, but it means he gets to up his rations, so for the sake of all those under his care, he does it – goes into no-man’s-land, ripped apart by Haters and regular people – what the Haters call the Unchanged – alike, and a cesspool of deathtraps.

The increasing pressure on Mark to perform and to support all those under his wing is an ongoing theme that is superimposed against the things he does in a real way – making it impossible to not feel for the guy who has to steal from the dead to provide for the living, even when the act itself is revolting. The increasing anger and panic of his girlfriend and the pressure from the army against him make him a very volatile character, waiting for the moment where he can fully emerge as a Hater-like person. The whole story balances precariously on this idea – that Mark, due to all the pressure, might be the key to the whole epidemic – that it is pressure and finally a break that will explain how some were Unchanged and others Haters.

Next to his dire circumstances, Danny’s misadventures make him seem more and more like the hero we want to root for – a thing that I do not fully understand yet, myself. He kills Unchanged – describes it in a cold and descriptive way, to the point where each bit of blood is accounted for and relished by his changed self. He is calculating and so far gone – even when he’s not killing Unchanged, he is thinking and dreaming of killing Unchanged. He travels mostly alone, looking for more to kill, not having much purpose.

It is this solitary lifestyle that allows for a bit of the philosopher to come through the Hater – he is the first (and only) character to make the connection between Haters and Zombies – he likens the listlessness of his life between kills as the same as the shambling corpses that just exist, and similar to zombies, it is only the opportunity of a kill that releases both the shambling corpses and the listless Hater wanderings, so that both become ravenous killing machines. It is an interesting metaphor – the idea that human ourselves live in a listless way – day to day, just living – until something exciting happens. The T.S. Eliot quote – “I have measured my life in coffee spoons” – sticks out at me as a very similar metaphor – that we waste our time waiting for something to happen.

There is something of the intellectual in Danny – even though he is an oftentimes irrational killer who lets life take him where it will until his mind fixates on the objective of finding his Hater daughter, Ellis. His long monologues seem like they jump around, and give this indication that he is such an angry, thoughtless killing machine, but the subtlety of his own musings are startling when mulled over, and the journey to get to Ellis becomes a metaphor for the whole of Hater evolution.

The book in general was harder to get through then I thought – and I am a self-professed zombie enthusiast. However, the metaphors are nailed pretty well and the writing is very good – if frustrating. The descriptions and characters are real in a way that only British characters can be, and I fully recommend any horror novel fan to give it a go.

Read if you Liked: 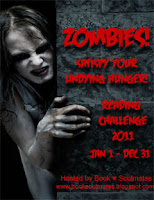