“To celebrate Banned Book Week, maybe we should burn the unbanned books so they know what it feels like!”
Friend E on my FB status yesterday. 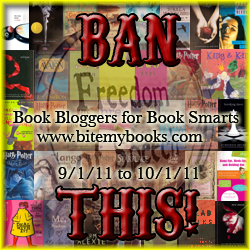 Book Banning.
It creeps me out even to say it. Or type it, as the case were. It is so unliberating, so paternalistic and close minded –so protective in such a closed off way. It’s terrifying. To think that radical groups of people have the power to restrict access to ideas by the virtue of their own belief that what they are doing is moral and proper? That they occupy higher moral grounds whereby, their opinion on things, like books, matters more than others? And this in the twenty first century. Like we didn’t go through all the awful things in the past millennia.
Honestly.
There are too many words to express my frustration, but none that can do justice to the swelling sadness I have whenever I hear that another parent’s council has banned a book based on indecency – anything from references to premarital (or, extra marital) sexual relations, to positing homosexuality as anything other than demonized,  to violence and language – as if sugar coating a story would automatically make it a good story.
You may remember my rant on Teen Fiction with sex (and how I cannot wrap my head around “protecting” sensitive, overly impressionable young minds from sex – because, like, it’s not a natural thing or anything, that they may want to know about. No. It’s evil. At the very least improper and …oh, forget it, even my sarcasm is angry.) where I tried to argue that the lack of sex in a story for the sole purpose that it wasn’t decent for young minds was a form of censorship. Now, if that is – can we imagine how bad book banning is?
One of my teachers, back in the sixth grade, equated book burnings with those people who were too afraid to open their own minds – so in desperation, they attempted to get rid of that which frightened them – at least, in its symbolic form. They were scared of their own sexuality – so they burned Alice in Wonderland, claiming that it represented female sexuality (you know, that very dangerous thing) and was warping the minds of readers. They refused to acknowledge their own racism, and so they banned To Kill a Mockingbird, preferring to wallow in their own hidden shame, than face it down and make a difference in the world. And the list goes on.
It’s a long list. Some people may be surprised as to what’s on it.
Here are a few examples: The Adventures of Huckleberry Finn, Catch-22, Catcher and the Rye, Fahrenheit 451, Flowers in the Attic, Grapes of Wrath, Lolita, Lord of the Flies, Lysistrata, The Color Purple, Beloved …
Books we consider “Classics”, books that have just come out, books that deal with a myriad of issues on a myriad of platforms – books that have value.  That share ideas with the world. And yet, all have been banned or challenged, mainly due to the ignorance of those who think they’re acting for the best, but in reality are punishing the world for being, themselves, too afraid to examine their own insecurities.
Banned Book Week (and month) for me is a practice in learning: it is a chance to inform the world of what we all secretly know – this is wrong. And to have it mill about the twenty first century is a sad observation of our own humanity.
And it’s a hope: it will one day be possible, I hope, to look back and wonder why Banned Book Week was necessary. That the banning and burning of books will be a sad long lost idiosyncrasy of a more fearful time of humanity.
Fingers Crossed .
Posted by Ammy Belle at 9/29/2011 10:50:00 AM