241 and a hilarious commuter convo... 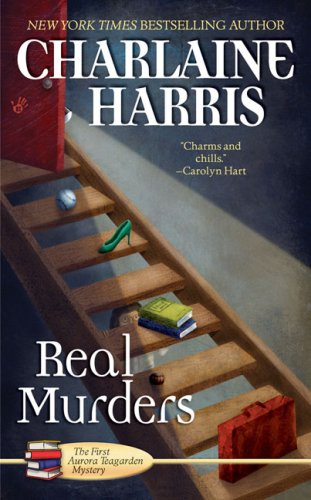 Here is the synopsis from Wikipedia:

"Local crime buffs meet monthly in the small town of Lawrenceton, Georgia to analyze famous murder cases, and in Real Murders they get all too close a look as one of their members is bludgeoned in the exact same manner as the crime to be discussed that night. Aurora "Roe" Teagarden, the 4'11" librarian, is not only a member of the club, a suspect in the murder but also a potential victim as other murders follow - each mimicking a famous crime. Roe must work quickly to discover which of her fellow sleuths is the killer. Could it be the police detective who's sudden romantic interest in Roe leaves her skin tingling, the new mystery writer in town who says he's bored with just writing or one of the other 12 members of the Real Murders Club."

Much better synopsis this time, right?

So here are my thoughts: Charlaine Harris wrote this book way before she garnered fame with the Sookie Stackhouse (aka. True Blood) series. She was a novice writer at the time and it does show in some instances, however, that being said, it is a really good read - which just strengthens the fact that I think Ms. Harris is a born writer! The plot was tight, the clues were there if you were paying attention and it was entertainingly peppered with good old sexual tension and small town nosiness.
I have a general criticism about Ms. Harris (that stood until I read the Grave series) and that is that you know which characters are supposed to be together, and you know there is supposed to be this passion between them - but the story is so involved in the mystery and the character development that passion usually falls by the wayside.
Apparently, though - my tastes in literature has started to broaden because I am not only lookign to read about passion anymore. The mystery side of the book was really good. And I will admit, it was totally nerdy of me,but ... I totally jumped a little at the mention of the murders I knew - especially Lizzy Borden! I am such a nerd. I also looked up the ones I didn't know. And is it totally nerdy to admit that I kind of wanted to start my own Real Murders club, too?
Anyways - unless you are stripping down each conversation Aurora Teagarden has throughout the book, the killer will not be apparent. The killer is cleverly hidden by her own doubts, her relationships - especially with the new author and her new cop suitor, and the preconceived notions Aurora admits she has about certain characters. The fact that these notions are confronted and analyzed makes the book something of a gem with the usual chick lit mystery that I have read (and I have read a lot!) as it lends a lot to the idea that if we pay attention to what people are doing, not what they are saying, we will gain more insight into their lives.
All in all, novice writing aside, it is a very good book - and you get so into it, you forget that she was a first time novelist. I highly recommend it.
_______________________________________________
"The Flying Troutmans" by Miriam Toews So, I will start off by saying, I was in a happy place when I read this - I read it all in one day (I do that sometimes, regardless of how big it is - I read Harry Potter #7 in a "day" - from 9am on the Saturday until 4 am on Sunday - I had dinner. That's about it.) next to a pool in Florida on a week long vacay with the Significant Other (henceforth, SO) where it rained for 4 out of the 6 days. Anyways - here's the synopsis:

Days after being dumped by her boyfriend Marc in Paris – "he was heading off to an ashram and said we could communicate telepathically" – Hattie hears her sister Min has been checked into a psychiatric hospital, and finds herself flying back to Winnipeg to take care of Thebes and Logan, her niece and nephew. Not knowing what else to do, she loads the kids, a cooler, and a pile of CDs into their van and they set out on a road trip in search of the children's long-lost father, Cherkis.

It's from the Randomhouse website. It's longer, so if you want to read the whole thing: http://www.randomhouse.ca/catalog/display.pperl?isbn=9780307397492 .
Anyways, I have the first cover - with the pelican, loved the cover. Though I think the last one is more descriptive, and I have a thing for descriptive covers.

So here we go:
Ms. Toews is a Canadian writer who chooses mostly to focus on Manitoba. That's a rarity in Canada, so I applaud her for that. She is also amazing. She lacks quotation marks and such (in the style of Jose Saramago - one of my favourite authors, though it takes me so much longer to read his books because he also doesn't believe in punctuation), which can be irritating, but once the story gets rolling, you're rolled up with the characters and your eyes are glued to the pages.
It is a really good book.
In the same vein as "A Complicated Kindness" her first book that I read, Ms. Toews dives into an already crumbling family and chooses the most steadfast character to narrate the proceedings. In this case it is Hattie, who has a long and complicated love with her sister Min. The story is truly about discovering oneself in the midst of a family situation, when all of the ordinary and expected relationships fall apart. I think this is seen most clearly in a scene when Hattie watches her niece and realizes that the 11 year old has become a dual natured beast - one part child, with the hopes and dreams inherent in being a little girl with purple hair, and a mini adult, who can lie and take on responsibilities in order to preserve the family life she craves.
It is a swirling descent into the depression that comes with the life changes described, and at the end, in her customary style, Ms. Toews does not bring the reader assurances of rainbows and sunshine, but rather an opening into the next phase. This realism is a tad sad, but it is alos relieving that characters that have been through so much have earned this opportunity to now get on with their lives, despite their past.
This book is not for everyone - I have a self described "introvert" roommate who claims that when I ask her if she's alright (after she walks out of her room with red eyes and sniffling, mind) I am actually insulting her because I am too, apparently, stupid to understand that she just has deep complex emotions. This would not be her book. Then again, she also claims reading fiction is akin to wasting money. She's lovely, isn't she?
I do recommmend it though for those who liked "A Complicated Kindness" and Canadiana buffs, and those who do not mind that happy endings aren't inherent in life.
__________________________________________________

Yesterday, me and my two cool roomates - the Russian (henceforth Princess) and the Chinaman (self imposed nickname, will keep it), went to the grocery store. On the way in CM's SUV, P was telling us about how she wanted to be engaged soonish. Here is my take of it:
P: He's upping his monthly payments to pay off his student loans ... that means he will take 30 months to pay that off and then he won't be able to afford a ring!
CM: But, don't you want him, not the ring?
P: Yes - I want the man. ... But I want the ring too. (btw, it's $10k)
CM: That's expensive though.
P: Yeah ...
CM: And his love cannot be bought with a credit card.
P: Yes ... but for everything else there's mastercard! So I can get my ring! :D

Anyways, in other news - my Proof from Createspace came today (insert crazy smiling insano face here!) and I luuuuurve it! Sigh. The dream. Authorship.
SO told me it was "cool" but he was too busy making Jay Cutler presidential posters for his brothers to do me any justice. Sigh.
Smithy - Great friend from Tulsa, she was happy for me! So were CM and P.
Have great friends! :D