It is.
When the aliens come to take over our brains - they will do it through poisoning the ketchup - I mean, tomatoes shouldn't be sweet. Yeck.
Anyways ... moving on (though now I am thinking about how it's interesting that all those great horror movie antagonists - zombies, aliens, etc - want us for our brains ... except Vampires. Maybe that's why they're sexy?) Civil Procedure! I love my professor. I think he is amazing.
I have come to a loggerheads with my bookshelf - what to review?
I wanted to review "Mister B. Gone" by Clive Barker - but I still have to wrap my head around that one, you know?
Then there are the Christina Dodd's I was reading in January: "Tongue in Chic" and "Here Comes Trouble" - but I wanted to review those with the other two in the series ... which I have not read yet.
So then I decided to cheat a little (so these won't count in my 2010 Read-a-thon) and review my go-to books when I am depressed: Three Fates by Nora Roberts. 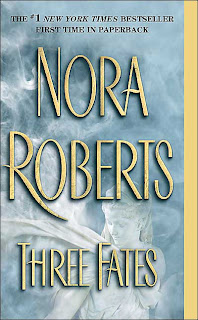 (PS. I totally want this cover, on the left - I have the other one. I want both - my consumer whore-ism rears its head)
So here is the synopsis:

Irish siblings Malachi, Gideon, and Rebecca Sullivan cherish the family legend of their great-great-grandfather's acquisition of one of the Fates, a trio of priceless, long-separated silver statues. When the Sullivans' Fate is stolen by an unscrupulous New York antiquities dealer, they vow to retrieve the little silver lady, and thus begins a quest that will send them racing across Europe, traveling through Ireland, and dodging killers in New York City. Most importantly, their search for their Fate and her two sister statues brings them into the world of a brilliant female mythology professor, a free-spirited exotic dancer, and a security expert adept at breaking and entering. This diverse sextet must meld their talents in order to thwart their enemy, retrieve the stolen statue, and stay alive while administering their particular brand of justice.

Not a bad synopsis - I like the use of adjectives. Now the "brilliant female mythology expert" is Tia, the "Free-spirited exotic dancer" is Cleo, and the "security expert adept at breaking and entering" is Jack. In the spirit of Nora Roberts, all 3 siblings/main characters find love. Malachi with Tia, Gideon with Cleo and Becca with Jack. Enter a few murders, a trip to Ireland, a bitch (Anita), and an Irish Mother who runs things quietly in the background - and you've got a Nora Roberts-esque crime/mystery with a romantic twist.
As I said - I love this book (which can effectively be broken into three books, of course)! I love the fact that all the characters are in such contrast with one another on the face of it, and yet when they are boiled down to their most desperate, they are alike in many ways. I like the romantic interplay between the three siblings and their romantic interests, and the strong female characters in the book.
As is typical in romance books, the men are described perfectly, the women imperfectly, which is the point. They are also super overprotective of their conquests, to the point of hilarity in some scenes where the women fight back. I like that the male characters aren't perfect. There is a scene where Jack is watching Becca roam around in his house through his cameras, and she begins to undress. And he watches until the last moment before turning away. It's that struggle that makes him believable. Same with Gideon and his unease, both with Cleo's past career as an exotic dancer, and her distrust of him. And Malachi is riddled with flaws, the prime being of course, pride. However, the language is edgy, and realistic, the people understandable and empathetic and this makes me crave it on those lonely nights when Boyfriend is in TdotOh and I am in South Detroit, pining.
The plot itself is tight - the siblings and their lovebugs flow off the page at a run, beginning in the past - off the coast of Ireland, through Sweden, Ireland, Eastern Europe, New York etc. Everything moves fast, but the steam scenes are slow and toe curling good. They are punctured with humour and vivid language so that you feel what is going on. It's excellent.
Obviously, I recommend this book.
I am not a huge Roberts fan - I do like some of her books, but I don;t avidly wait for the next release. However, having said that, when she gets it right, she shines. This may be one of my favourite books. Followed closely by her Dance of the Gods trilogy.
______________________________________________
So it's a bit of a cheat, but it counts for me. I read Three Fates on the plane to Portugal in 2003. It is 2010 and I still reread it. IT actually still smells like sand from the time I took it to the beach. Mmm, beach smells.
I miss the beach. The good weather here has made me nostalgic for the sun tanning, swimming and lemonade that I associate with the beach. Sigh.
Because of this, I am including a picture of the beachmy family goes to on occassion, in Ocean City Maryland: 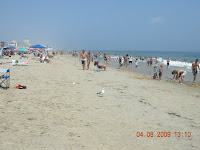