I know I said "Monday". But I have a great excuse! Or, rather, excuses:
1) I am so sick right now I think I singlehandedly funded the Kleenex industry this past week;
2) I had a bloody ConLaw midterm; and
3) I was helping 1Ls with their first year moots.

But now, now I am here and ready for the next review:
Steig Larsson's "Girl With a Dragon Tattoo" 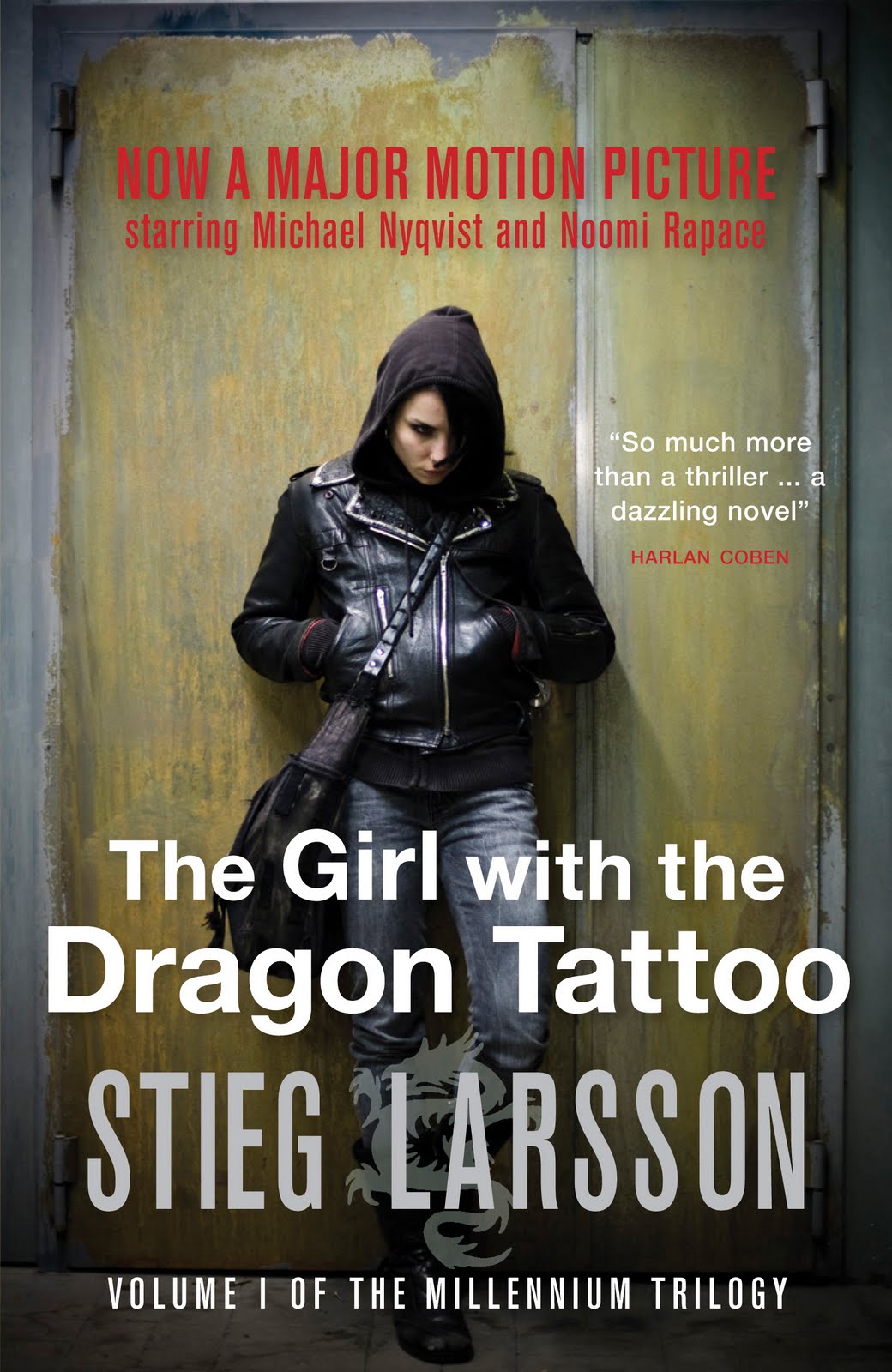 First off - I must say: Loved. It was everything I thought it was going to be and then it slipped off the road well travelled and flew into infamy. But let's start with some basics.
Here's the synopsis:

Disgraced journalist Mikael Blomqvist is hired by Henrik Vanger to investigate the disappearance of Vanger’s great-niece Harriet. Henrik suspects that someone in his family, the powerful Vanger clan, murdered Harriet over forty years ago.

Starting his investigation, Mikael realizes that Harriet’s disappearance is not a single event, but rather linked to series of gruesome murders in the past. He now crosses paths with Lisbeth Salander, a young computer hacker, an asocial punk and most importantly, a young woman driven by her vindictiveness.

Together they form an unlikely couple as they dive deeper into the violent past of the secretive Vanger family.

Synopsis from http://www.stieglarsson.com/The-Girl-With-The-Dragon-Tattoo
And here are a few reviews I thought were well done, even if I didn't totally agree with them:
http://www.feministing.com/archives/020293.html
http://blogcritics.org/books/article/book-review-the-girl-with-the/

Also, a little bit of trivia about the book:
Now to my thoughts on this book:
As mentioned before, I loved it. I found it hard to get through at times - for two reasons: first, the beginning of the book is heavy on the particulars of business transactions between a Swedish company and a post-communist Polish/Eastern Block deal, which can be confusing (I broke out a pen and a paper and started flowcharting it myself); secondly, it's graphic with the torture - of both men and women. This is not for the faint hearted. This is a story predominantly about power struggles.

Unfortunately, the majority of the power struggles are between women with little power and men with lots. And it is that imbalance that creates the tension by which the book speeds along. Particularly after Blomqvist signs a contract and begins delving into the history of the Vanger family, the tensions play out to illustrate a dark world that is rife with unmediated terror for women in general.

And then in walks Lisbeth Salander.

She is present from the beginning, but it is through her own struggles with a more physically powerful man - her "guardian" - and her solution to him as a problem (that's where the graphic-ness really begins), that we begin to see that certain things can be done, or rather - more specifically, that rape is just a control and power thing, not a sexual thing. And it also makes me swell with justice, I think, to see such a man reduced to the sniveling bug he is. So through the graphic violence, there is much to celebrate in a way, as one of those women-hating men is brought down to his real size.

Though Salander is not perfect - int he feminist sense, I mean, referring to the article above - she is perfectly imperfect. She has suffered from birth it seems - psychologically, though it is never said how or why she became the way she is, she remains slightly unhinged in an alluring way.

Blomqvist also carries that unique allure - more to his thought processes I think, then his psychological trauma. He is a throwback to the seventies in a way - a free love in the technological age type, with his grey view of the world and his sharp mind.

Of note, for me anyway, is the strong female presence in the book: Asides from Salander, there is Berger - Blomqvist's partner at the magazine Millenium and sometimes lover; The Vanger Family women - Harriet, Anita and Cecelia - and hell, even the absolutely evil Isabella. All are women with strong minds and wills that refuse to be broken completely. They take their troubles and move on, they never forget, but they use them to establish the ability to move ever forward. They are not perfect - sometimes you will hate them (esp. Issie, the bloody awful Mother/Neighbour/Person) but if you finish the book you will understand that they are strong and that makes them more real.

The plot itself was tight. There was no room for error - it clipped along at a good pace, the facts falling into place, the new technology of the 2000s coupled with the sharpness of two investigative minds able to solve a 33-year old mystery - yes, Readers, the mystery is solved (be prepared for even more graphic-ness).

All in all, amazing book with a compelling plot and real characters. I highly recommend this book and cannot wait to read the next two in the series! :D

That's all for now, Unfortunately I am still with the sickness :(
Pity me, oh Readers, Pity me. And my plugged nose.