...And shameless self promotion (Thanks to Laineygossip.com for that beauty)!

So, like, I went home last night, to Toronto (Ontario, Canada - TdotOh!) where I found my cat had knocked over all my meticulously piled books (broken shelf) in a amusing if baffling effort to reach the paintbrushes I keep on the top shelf. Anyways, in a fit of insanity that masked itself as OCD cleanliness, I started cleaning it all up and ended up making a fort with the books, dvds, art supplies and a shoe box. Anyways, I reached for the shoe box and my cat's head popped out of it with an angry "Meow!" (but he's deaf, so it sounded more like "Mrowr") and proceded to glare at me with those soul ending green eyes until I let up on my attempt to kidnap the box and found another box to take its place in the giant nerd fort.

It reminds me of McP and mine's "Wall of Awesome" (aka. Project Book LB into her room for the rest of the year)...
Here's a picture: 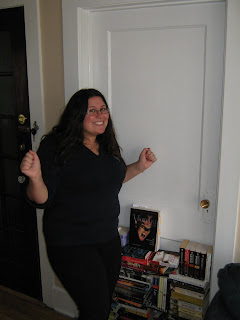 Yeah ... that's me and the Wall.
And yeah, that's me in front of the wall - ensuring me a spot in the 9th circle (which is possibly, my grade 11 Classical Civ classroom - Thanks, Ms. Riggin/Ms. Athens 30BCE).
The story behind this is one part sad, one part frustrated, and one part sleep deprived students having fun - in case you don't know math - that means, 3 parts of crazy!
Anyways, Our roommate LB (aka crazy psycho cat lady with a wish to sink metallic claws into any boy who makes $150k/annum and looks like Ken) hates books. Yes I know - crazy! Well, re. nickname, right? Anyways, so she was gone for the week and she had left us some list or another of things to do in her absence (because as 23 year old post grads, we were clueless on how to operate - what did I do before her? Such dark, bleak times ...). So we were not feeling the love towards good old LB. Somehow, through our joking around, we came up with a brilliant - BRILLIANT! - April Fool's Joke! Let's brick her into her room early on April 1st morning - with books! We will pile them up until they reach all the way to the top (between Me and McP - we can totally do that) and you see that book at the top in the picture? The Vampire book? With good old David (aka Keifer Sutherland as a vampire from "The Lost Boys" - PS. Luuuuuurve that movie!) on the cover? That would be at her eye level! Can you imagine? *Snickers uncontrollably*

Anyways, the Wall of Awesomeness has been abandoned ... for now. It helps that McP and I are trying to move all our stuff out of the flat so that we can shenanigan out of there on April 30th after last exam (well, McP is a teacher - so last class, but you know what I mean, yeah?).

One day, the WoA will be resurrected!
*battle cry*
________________________________________________
Anyways - to my fort. It is awesome - why have I never built a book fort before?
Now, unfortunately, I have discovered a catch.
Benjamin Bradley - the white deaf cat with a heart murmur who now reaches my chest when he stretched up to get my attention - does not like book forts. In fact, he is morally, ethically and possibly anatomically offended by them. Therefore, it had to die. It had to die a quick death where the crashing of books into other books and the floor would resound through my house and make my half naked 17 year old sister run out of her room screaming "What the hell was that!?". Anyways, he jumped on it. Then he found (don't ask me how) my 1906 printed Jane Eyre and sat on it. That is how I found him.
Note to self - Deaf cats do not hear screams of "Why!? Oh Goddess!? - why!? What have I done ... Dammnit! That's Jane Eyre! Do not sit on Jane! Bloody Benjamin! Off!".
No, the deaf cat will stare at you, then lick himself.
______________________________________________
Onto the Shameless Self Promotion! :D
So I write. Or at the very least, I try to write.
In highschool, I was a very active writer - stories and novels and news articles. Somehow, in my all girl Catholic high school - I was seen as a radical (no? really?) and was banned from the newspaper starting in Grade 12. Bloody rulemakers! *shakes fist*
Anyways, I just got my own proof for a book I finished in the tenth grade, tweaked a little for NANOWRIMO and submitted. 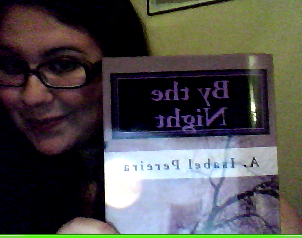 [ Me and "By the Night", told you - shameless]
Now I am all sorts of inspired and want to write more and ... PUBLISH! Can you imagine? I can! And I want it!
*drool*
Would you read something (asides from a blog) by me?
__________________________________________________
More thoughts!
Why is it that the female body (or naked bodies, in general) are still offensive to people? I mean, seriously? After thousands of years of development and technology and such - hasn't there been some sort of progress? No ... sadly, no. See: http://news.bbc.co.uk/2/hi/americas/8551528.stm
Why is it that I want money, need money - and yet it makes me feel a tad icky?
And when did "feminism" become a bad word, dammnit!? I am bloody proud to be a feminist - and you should, too!
Also - how do you get back a book from a crazy psycho roommate without talking to her (as she will cry and tell you all her emotional and developmental problems are because you yelled at her for deliberately locking you out of your own room - loooooong story) or outright stealing it from the shelf in her room where I can see it wedged between Black's law dictionary (which is an absurdly expensive book - and it's brown, not black) and a Bible?