Oh yes, the time has come: It's my review of Night of the Living Trekkies byKevin Andersen and Sam Stall, published by my favourites, Quirk Books. 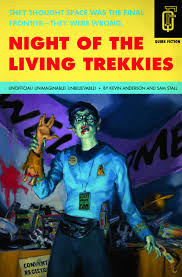 Here's the synopsis and the awesome book trailer:

Journey to the Final Frontier of Sci-Fi Zombie Horror!

Jim Pike was the world's biggest Star Trek fan—until two tours of duty in Afghanistan destroyed his faith in the human race. Now he sleepwalks through life as the assistant manager of a small hotel in downtown Houston.

But when hundreds of Trekkies arrive in his lobby for a science-fiction convention, Jim finds himself surrounded by costumed Klingons, Vulcans, and Ferengi—plus a strange virus that transforms its carriers into savage, flesh-eating zombies!

As bloody corpses stumble to life and the planet teeters on the brink of total apocalypse, Jim must deliver a ragtag crew of fanboys and fangirls to safety. Dressed in homemade uniforms and armed with prop phasers, their prime directive is to survive. But how long can they last in the ultimate no-win scenario?

And because I cannot seem to embed this youtube vid, go here.

Now that you have feasted your eyes on the greatness that is the book trailer - no, wait I'm sorry: I have to talk about the awsomeness that is the book trailer. Now, I am not usually a huge proponent of book trailers - I feel usually that they are evil teases that influence my imagination way too much. However, Quirk Books has a gift: They make great books, AND great trailers for their books. I mean - after seeing that - don't you feel like you must read the book? At whatever cost? Even if the hordes of Zombies are at your door, pounding with their fists to get in? Yes, I think so. Totally awesome. Okay, onto the review: I loved it. Oh *fans self* yes. Loved, so much. And on a few levels. But first - a warning: I am a huge fan girl ... for Zombies. I was forced to watch Star Trek as a kid, and then I found Star Wars, and well ... Han Solo > Kirk any day (though I do love me some Billy Shatner). As I am a huge Zombie fan girl, and know a bit about Trek, this book was made for me. That, and I am picky. Very picky. Especially with Zombies. I can recite to you guys the decent Zombie adaptions in existence, and why they are awesome - but I will leave that for another post and just get on with it!

First of all, the characters were awesome! We are introduced to Jim first, but we also get a bunch of other characters right off the bat, and in a very short time, we're acquainted with our core group of people. And right away we are pulled into the debate: Is this a Sci-Fi/Star Trek book where all ends well? Or is this a Zombie movie where all ends terribly? The characters are key in bringing this about - they're in your face and completely natural, they spill out of the page like they were meant to, and it shows. I particularly love Leia - she rocks the big one - something about a kick ass female heroine with witty one liners that gets me :P And the writing: I didn't know what to expect, to be honest. I figured it would be funny, but it was hilarious. And I figured there would be many pot-shots, and oh boy were there! But it wasn't just that - it was the inner monologues and the quick pace of it - it kept you interested, it kept you laughing and it kept the story moving. Again, there are many fandom aimed quirks to it - for example:

"It's these uniforms," he finally choked out between sobs. "They killed us. They're cursed. And I'll be the next victim."
"You need to back uyp a minute," Jim said. "You think you've angered some kind of Star Trek deity by wearing a red uniform?"
Willy took a moment to compose himself.
"In the original Star Trek series," he explained. "The characters dressed int he red tunics were always doomed. If one beamed down to a planet with Kirk and Spock, the guy in red would always, always die. So my friends and I decided to, you know, celebrate that by forming a club. It seemed like a good idea at the time. We'd all come to GulfCon dressed in matching red shirts. We'd say we were the crew of the USS Expendable. It would be hilarious, because in the real world, no one dies just because they wear the wrong costume to the sci-fi convention, right?" (pp. 118)

This book is loaded with those kinds of witty comments and side tidbits. It's a short read - but honestly, that doesn't even matter since every word was deliberately chosen to make the most impact - and so what you have at the end, is a slim volume along the lines of Fan Boys and other such self depreciating works. I cannot wait for the next release of Quirk - they always one-up themselves, and I will readily and eagerly snap it up first chance I get! :)

The other Zombies in the Quirk Bag - incl. Pride, Prejudice and Zombies, Dawn of the Dreadfuls and the upcoming, Dreadfully After Ever!!

Fan Boys - a movie dear to my heart.